How did Google Talk change from a dream to a nightmare?

After Gmail, Google came up with Google Talk which is a hack on top of the popular free mail service. To "talk" to someone, you already had their Gmail (or jabber) address, so you thought you'd send a buddy request to said address thinking they might just happen to use Google Talk. Indeed they do, and they approve your request: they appear on your buddy list. Now you know for sure when they're "online" (2000s' vocabulary, I know), and you know when you send them the message, they'll see your message. If they are offline, it will deliver the message whenever they get online. They can tell you that they're busy at any moment, and so the client tells you exactly so and encourages you not to disturb. They have a web version or a lightweight Windows client that is probably the cleanest Windows chat client ever written. If you use Linux/Mac, fine, just use GAIM/Purple/iChat/whatever. If you use Android, you have Google Talk, which is also a nice, lightweight, unintrusive client. If you wish to use any other client on any other platform, it still works, too. Regardless of what client you use, it just works the same way. You get the messages regardless of what client you use or how many computers you signed on. You know exactly who is on your buddy list and who will see your messages and who will be able to message you. If someone has a nickname, and you don't like it, you can rename the person so you recognize them. Or if the person used their real name, and you only know them by their nickname, you can rename them too. If someone annoys you, you can revoke the authorization, and they bother you no more. If you both happen to use Google's clients, you can send/receive files, have voice and video chats, which is nice. But for general messaging, Google Talk works with literally everything. If a client doesn't support enhanced functions, the voice/video call buttons won't get lit up. But when it works, I have had talks for 5 hours on a spotty connection. It barely consumed any bandwidth. Life was great. Nothing fucked with you. 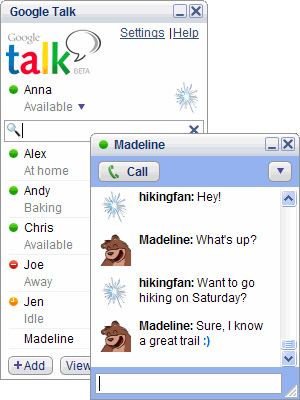 Then, Google decided they need to rebrand Google Talk to Hangouts. So then they tell you that you need a Google+ account, which they would nudge and trick you to create one. After a year, you finally fell for the Google+ meme and secretly hope your friends did, too. So you have to use the Google Hangouts on a separate tab in the browser, or it gets juxtaposed to your Gmail. Either way it will slow your lastest Intel i5 laptop down and make your fan whirr like crazy just to have one conversation. It doesn't provide a native desktop app, the desktop version no longer works, and the phone version works like shit. You can't use a Jabber client with it, or maybe you can, but there is no official documentation. At least they don't want you to use any client anymore.

Anyway, the best feature of Hangouts is initiating a conversation with someone you haven't talked to before. Sometimes searching for their email address will work, but in general, you'll have to be already talking to them on the phone or Skype or whatever. Then you click on "New Conversation" on the Hangouts window, and then they will have to tell you how to "search" for their name. For which 50 names will likely show up on the search result, then they'll have to describe to you what their profile picture looks like over the phone so you pick the right one. If they have a foreign name with weird characters then you are fucked because you don't know how to type it. If they have a common name you're fucked because you will have 5000 names show up. Or for some reason their name doesn't come up in the search result you're fucked, too. If any of those happens, you resort to asking them to initiate the conversation with you. Anyhow, given you managed to get past that and now have a messaging window with them, you have to type something like "hi." You hope they will see it, and ask if they did. If they didn't see it, then you say this shit doesn't work and you two consider this attempt a dark, sad event in your relationship.

If you're lucky and all of that works, they will have to click "accept" and now you can send text messages to each other (hurray!). With Hangouts, you can't go off the record by default, there is no such option to not log your message (unless you use Gsuite and you're the admin like me). If you go off the record, it will tell you that it might not deliver your offline messages – don't trust Hangouts to deliver messages properly. If you want to talk, there is no button to have just a voice call on the web, but there is a button on the phone version. On the phone, you don't know that button will call their phone or will call their Hangouts client, so you're afraid to tap on it. Anyway, you give up on the idea of just having a voice call and decide you'd just have a video call. In which 50% of your attempts will fail and 50% will work. Regardless of the chance that it works on your computer, it has a 50% chance of working on the other side. If you use Firefox, there is a 100% chance it won't work. Given you and your friends, luckily, have all the right software installed after 10 minutes, there is another 50% chance it will actually notify your friend audibly when you call. Or it might have decided not to disturb them for some reason, and then you have to call them on the phone to let them know that you're calling them on Hangouts.

On the new Hangouts, you also can't tell someone that you don't want to be disturbed now. There is no longer an online/offline/busy state, everyone is assumed to be online all the times, and everyone is always free all the times. You receive your messages at 1 PM, and sometimes at 4 AM. You never answer enough messages, so you just get tired of messages and forget about them, although there are times you really just are busy and forgot to reply to that important message.

You no longer have a buddy list, instead, you have some sort of list - some shit you don't understand. You can't control what gets shown on it. You can't delete or revoke anyone's permission to contact you if they annoy you (although you can block them forever). Sometimes a person shows up twice in your list: Sometimes it is because they actually have two different email addresses (one of which they don't use anymore, but you can't tell what is the inactive one, and you can't remove it anyway), sometimes it is because they have Google+, sometimes you have no fucking clue why. Ok, maybe buddy list is too hard, you give up, you click on the recent conversations list, which is mixed up with voice calls and messages. But your recent conversations aren't there because you have them off the record. You don't know how the fuck to reliably have a conversation with someone. On the new Hangouts, you really have no idea when, where, and whom it delivers your messages to. If it does, you have no idea how.

Lately, you meet a couple of lost Linux buddies and they complain to you that you didn't return their messages. You say you never received the messages, and shrug. You never have an idea why didn't a message go through, maybe because they used the client that is not officially supported? But your buddies silently think that you're a lying son of a bitch. What they don't know is that you just want to be a Google fanboy.